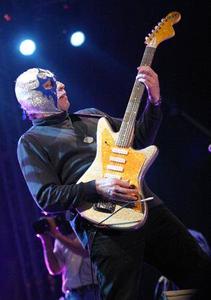 Danny Amis, aka Daddy-O Grande is perhaps best known as one of the founding members of the musical group, Los Straitjackets, although his contributions to the world of Guitar Instrumentals goes back much further. Born in Memphis to a respected newspaper editor, his family moved to Minneapolis when he was 4 years old. His first band, The Overtones, brought guitar instrumentals to the late 70s Twin Cities punk scene, and was one of the first acts to appear on the now legendary Twin/Tone Records. From there Amis made a much bigger instrumental splash when he moved to New York City and joined up with the Raybeats for several records including Guitar Beat. Switching roles from Musician to engineer, Amis produced an album for Beat Rodeo before moving on to Nashville where he landed a job working for the Grand Ole Opry, TNN, Nashville Now and yes, Hee-Haw. Enjoying his newly found world of paid vacations, Amis took time to travel and became enchanted with Mexico City and the Lucha Libre. Soon after that, Amis donned a silver and blue wrestling mask and the persona of Daddy-O Grande was born! It wasn't long after that that America’s Instrumentalists, Los Straitjackets, was formed. For more than 13 years in Los Straitjackets, Amis is enjoying the success of 11 critically acclaimed CDs, a Grammy nomination, numerous television appearances, and over 1300 live performances worldwide. Among those live shows was a televised 2005 concert in Daddy-O Grande’s home away from home, Mexico City, in the Historic Plaza de la Constitucion, for a crowd of over 70,000 fans. Amis also had the honor of hearing his own Calhoun Surf performed and recorded by his heroes, The Ventures. Besides performing with Los Straitjackets, Amis also produced the debut CD by Mexico’s instrumental sensations, Lost Acapulco, as well as producing and directing the ever-popular Go-Go Robics DVDs starring America’s queens of burlesque, The World Famous Pontani Sisters. In the spring of 2006, Amis returned to Mexico City to record his proudest accomplishment to date, Daddy-O Grande in Mexico, reuniting with his good friends, Lost Acapulco. The year 2007 saw Daddy-O Grande travelling to South America for many Solo concerts in Argentina and Brazil. For 2008, look for Los Straitjackets in concert in Mexico City, as well as more Daddy-O Grande solo tours, namely in Europe! Citing the great surf-guitarist Dick Dale as a major influence, Danny Amis has also developed an ability to write about himself in the third person. www.daddyogrande.com www.myspace.com/daddyogrande