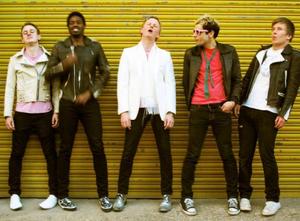 Cyanide Pills - 'Still Bored' Loved the debut album and have been waiting for what seems like ages for these Yorkshire punk 'n' roll power poppers to knock out the second album and after putting it to the back of my mind and forgetting about it it duly arrives. Cranking up the stereo - it's a no brainer as to what's about to happen because unless they've gone prog or Billy Big Balls this is gonna be top notch and as 'Can't Get It Up' has barely hit the opening crescendo all is well in the universe and Cyanide Pills are in the house with their infectious pop tunes. A string of blistering singles after the self titled debut are present and correct on this sophomore release that sees this five piece rise to the top of the class. 'Up Against The Wall' has lyrics to nod along to approvingly as the band rock your tits off, only to be followed by the superb 'Johnny Thunders Lived In Leeds'. It's up there with the best singles of the past twelve months and made Cyanide Pills one of the hottest bands in the UK! Fuck it,why stop at the UK, the world beckons... Not so much a change of direction or any drastic progression, more an evolution; Cyanide Pills most certainly know how to pen infectious melodies and wrap them in some timeless stomping pop punk with some simple yet effective lyrics - yes, these Yorkshireman have got the lot: the singles 'Up Against The Wall', 'Johnny Thunders Lived In Leeds' and 'Where Did It Go?' along with the dub of 'Lock Up Dub' and the glitter of 'Teargas', the stabbing punk rock of 'Apathy' and the majestic 'Outta Nowhere'. Cyanide Pills have got one foot firmly in the past but the other is striding the future and they've managed to pen some mighty tunes that transcend the decades and sound as relevant in 2013 as anything else I've heard. This is Rock and Roll as it should be. This is exciting, dangerous and, above all, a band who know how to write superb songs and I suspect they damn well know it too. They might be slowing up these days with this album having two less tracks than the debut but, c'mon, seventeen tracks for your money is more than generous, and by the time you reach 'Dance With You' and its 'Rebel Rebel' guitar lick slung in for good you'll realise that this is music to make the listener giddy, it's that catchy and, well, awesome!approved image lrg 2013 I'm going to play the fucking living daylights out of this bad boy simply because it's so bloody good! My advice would be simple - go click on the link and join the party or stay uncool! www.damagedgoods.co.uk www.myspace.com/thecyanidepills