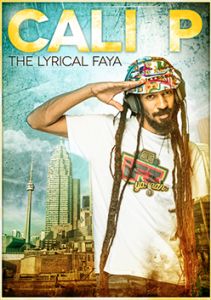 With locks stretching from the crown of his head almost to the sole of his feet, the artis CALI P bears an aura of spirituality often identified with those whose sacred mission it is to take the message of Reggae and Rastafari to the diverse parts of the earth. His easy manner comports with ones expectation of a life dedicated to a mission of peace and love. His delivery and passion certainly remind his audience that while the lyrical fire of Rastafari burns brightly within his soul he is keenly aware that the message must be delivered in a contemporary manner. CALI P expresses the eternal truth of Rastafari with a youthful freshness that is so appealing.
One is able to discern strains of his multicultural heritage in his music. Born Pierre Nanon to a mother from Switzerland and a Rastafarian father from the French Caribbean territory of Guadeloupe, CALI P seemed destined for the assignment of transcending racial and ethnic challenges in the promotion of his music. He describes himself as a singer, songwriter, rapper and one could add a lyrical firebrand who has been devoted to the playing of the drums since the age of three. While still a teenager Pierre would join AKIYO, his father’s band, and take the unmistakable step in fulfilling his destiny.
Nanon would have his first real embrace of Jamaican Dancehall through the GIDEON SOLDIERS sound system at the close of the Twentieth Century. He would release his first single “Forward” in 2005 which was followed by a number of other singles. He was soon in demand across Europe bearing the banners of Reggae and Rastafari on his youthful and slender shoulders.
His 2008 debut album ”Lyrical Faya” would follow and the world would begin to take notice of the young Rastafarian who was delivering a traditional message in a fresh and exciting manner 2010 would be a pivotal year for CALI P as not only did it mark his move from Switzerland to Jamaica but the release of his critically acclaimed ”Like a Lion – Hotsteppa” which was part of the soundtrack of a documentary of the same name attracting, positive international reviews. CALI P confidently asserts that Jamaica is his base - the world is his stage. He speaks fondly of performing in Europe and looks forward to performing there each year. He points out that when he tours he loves being accompanied by his Jamaican band which he notes brings a certain energy to his performance.
2011 would see the release of “Unstoppable” (HEMP HIGHER) seems a reflection of his musical destiny. The album includes the spiritually assertive single ”Jah Rule the World”. The video for this single has attracted much attention for the outstanding images which it has captured.”Unstoppable” climbed to top ten positions on the ITunes charts in a number of territories including the USA and Canada.
In 2014 he released the "Healing of The Nation" EP (HEMP HIGHER), which also topped itunes reggae charts all over Europe and saw the artist embark on a massive "Healing Of The Nation" world tour in 2015, including performances at REBEL SALUTE (Jamaica), SUMMERJAM (Germany), REGGAEJAM (Germany), FESTIVAL DE L'ETE (Canada), REEDS FESTIVAL (Switzerland) , performances in Costa Rica and Malta and many more...
2 years after, in 2016, he followed up with “Ithoughts” - a full album featuring productions from MANUDIGITAL, FLASH HIT RECORDS, SEANI B, TEKA & EQUINOXX MUSIC which went straight to the top of the reggae charts and also entered the notorious US BILLBOARD CHARTS (Reggae). The first single featuring CAPLETON rapidly racked up over 1 MILLION VUES on youtube - Following that Cali P went back to what he does best: Touring the 4 corners of the world - and his “Ithoughts” tour saw him travel far and wide to new destinations including the Ivory Coast (Africa), India, Dubai and well as a full fledged 12 date UK tour with UK reggae artist NATTY. The summer of 2017 will see him perform all over europe, gracing it’s biggest stages.. make sure you catch him live on the Main Stage at SUMMERJAM, at ROTOTOM FESTIVAL’s Lion stage or at one of the many other stops of his tour.
CALI P definitely has a lot in store for his fans so make sure you look out for his new releases soon. Yes the expectations are high but he clearly has what is required, spiritually and musically speaking.