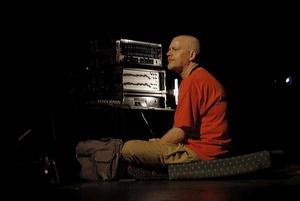 Bernhard Günter, born 1957 in Irlich, Germany, begins his musical life playing the drums at age 12, then switches to electric guitar at 17. He moves to Paris in 1980, where he takes up auto-didactic studies of contemporary composition techniques in the libraries of IRCAM and the Centre Pompidou, and attends Pierre Boulez's lectures at IRCAM and Collège de France. Returning to Germany in 1986, he starts working on computer-based music in 1987; after four years of preparation and one year of work he releases his influential first CD Un Peu de Neige Salie (1993), followed by Détails Agrandis (1994). In 1995, he founds his own label, trente oiseaux. During the following decade, Günter releases numerous CDs and performs his music around the globe. Un Peu de Neige Salie is listed as one of the Top "100 Albums that set the World on Fire" by The Wire, one of his works receives an Honorable Mention at the 1999 PRIX ARS ELECTRONICA. After a decade of composing electro-acoustic music, Günter re-discovers his interest in playing instruments and improvised music in 2004. He records two albums that combine prerecorded electro-acoustic basis tracks and improvisation with Graham Halliwell and Mark Wastell under the name of +minus, and an entirely improvised album with Reinhold Friedl and Michael Vorfeld, playing a self-devised string instrument he calls the electric cellotar. Both trios also perform live concerts. In 2005, Günter adds various bamboo flutes, the shakuhachi and the xiao among others, to his sound palette, and begins exploring a middle course between composition and improvisation that uses multi-tracking, editing, and arranging improvised parts that are exchanged between artists through the mail. The first result of this approach (which Günter tentatively calls 'compovisation') is the release of Ataraxia (2005) in collaboration with Heribert Friedl. In November 2006, Friedl and Günter complete their second album, ~trans, using a field recording of three power transformers as its basis. Günter begins playing the clarinet in mid-2006 and uses it for a first through-the-mail collaboration project with guitarist Gary Smith. Günter and Smith eventually form a duo and name it Klangstaub; in Klangstaub, Günter plays clarinet, alto clarinet and pocket trumpet, combining them with live looping and sound processing. Having dropped all flutes and the electric cellotar, he has recently added a five-string fretless bass to his musical palette and is learning to play the Arabic Oud. He continues exploring the synthesis of composition and improvisation, incorporating live looping as a means for the formal organization of 'instant compositions'. Klangstaub have recorded a body of improvised pieces in July and October 2007, and April 2008 ( the 2008 recordings have not yet been edited / released ). Their first concert was at the no.signal @ Wire 25 festival – AvantJazz in London on 17 November 2007. Günter also recorded and played a concert with the French improvisation ensemble SAP(e) in Montpellier in February 2008, and is currently collaborating with Luigi Turra. To ensure his artistic independence regardless of economic considerations, Günter works part time as an English teacher in adult education, and as a translator. In his free time, he enjoys reading, photography, and mountain biking. www.myspace.com/bernhardguenter