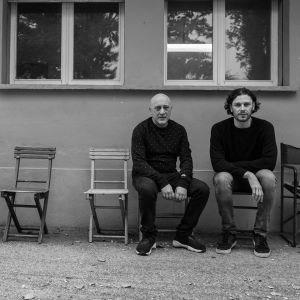 DINO ANGIOLETTI:
Born artistically in the Bologna club Kinki – one of the cult clubs for the development of the Italian house – Dino Angioletti immediately catalysed the attention of the entire scene, thanks to a very personal interpretation of electronic, with Detroit influences, deep approach and strong sense of groove.
This residence opens to him the doors of the most famous Italian clubs that are impressed by his class in mixing the most different influences: in very little time Angioletti became one of the most popular names in the national panorama, appearing at Echoes (RI), Cocoricò (RI) or Fitzcarraldo (FI), other than the one night Doc Show, Star’s Cake, Angels of Love and Latin Superb Posse, all experiences that shape him and introduce him into the elite of the most famous deejays of the period.
Since 1994 he has become a member of the Pasta Boys crew – with Uovo and Deejay Rame – with whom he produces various hits, he collaborates with superstars like Osunlade, Wunmi, Masters At Work and established the Manocalda label, to give space to new productions Made In Italy with a strong experimental touch.
Because of his success, as a soloist and together, Dino Angioletti gains fame also abroad, in famous clubs in London, Ibiza, Barcelona, Geneva, Switzerland, Miami, Mykonos, Sidney and Melbourne, also gaining contracts with various foreign labels and the Italian label Re>Vox.
At present Dino is starting a new label and collaborating with famous clubs such as Kinki, Folies de Pigalle, Miss America, Echoes, Le Plaisir, Fluid, Juice of Juice, Kama Kama e Red Zone.


FABRIZIO MAURIZI:
Fabrizio Maurizi is a native of Bologna (Italy), a city that has always paid particular attention to the original Detroit Techno movement, making it the perfect place to grow up in terms of music. After a brief spell as part of the city's militant illegal rave scene, Fabrizio soon graduated to residencies at some of the most important clubs in the country.
Fabrizio started producing his own sounds, switching to music software programs after 10 years of studying piano. Completely hooked on very low bassline frequencies, his tracks explore the sometimes dark, sometimes funky side of techno, using completely mad vocal samples to give his music a unique flavour. Fabrizio definitely has DJing in his blood, liking nothing more than to lead the dancefloor out of darkness into light and vice versa, allowing his music to slowly evolve through the interplay of rhythmic analog elements and jumping basslines.
His dj set is an endless journey between house and techno, the sun and the moon, with no boundaries between the music genres: the organic elements are perfectly melted with futuristic sci-fi atmospheres.
In 2007 he founded with his friend/partner Idriss D the label Memento, releasing his first ep "Hasta la Baldoria Siempre" that was an incredible start for an unknown artist and label: the ep joined quickly the top ten everywhere.
One year after Fabrizio realized his dream joining the Minus family, where he started to produce and performing with.
Now Fabrizio is delivering his unique music all over the world, playing in the best clubs like Fabric , Rex , Robert Johnson , Womb , Cocoricò , Cocoon…just to name a few, garnering an underground very high reputation for his unmistakable dj set.