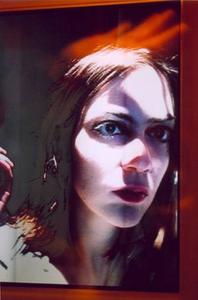 Dopo l'esperienza con Scissor Girls e la no wave dei Bride No No, nuovo disco solista su Drag City per Azita Youssefi, magnetica "crooner del disastro" da Chicago... new record is finally ready for your eyes and ears. Disturbing the Air Disturbing the Air is a bereaved, angry, terrified, and absolutely gorgeous trip through the mirror, reaching for something that's already gone, hoping for the glimmer of a reflection where one no longer exists. In order to realize the chords and lyrics and songs that she gathered for this record, AZITA made a bare-bones delivery, where the relationships of sounds between voice and piano could vibrate together, creating a togetherness to underscore the poignant lack of togetherness in the words. This doesn't mean that there's only voice and piano on Disturbing the Air – but it doesn't mean that you're hear much more than that either. The experience of loneliness and despair is a feeling as rich as it is poor, and within the shimmers and echoes of voice and piano, there are other sounds – some real, some imagined. Disturbing the Air is a haunted record, with ghosts in every song. Their beauty and elegance – and the losses of the lives they've lived – makes for one of the most intense and undeniable listens of the year. Make some room in your air for AZITA this September www.azita.info www.myspace.com/azitamusic