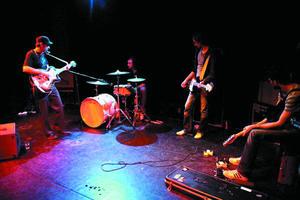 There are actualy two Altantic Cables. The most recent Atlantic Cable resides in landlocked Prague and is the solo project of Canadian-born Tyson Cosby. Atlantic Cable is a history-of-science inspired semi-acoustic outing. Drawing heavily on influences ranging from Eric Satie to Facepuller to Wild West comics, Atlantic Cable released a debut full-length CD “Darwin Avenue”. Darwin Avenue is a mult-instrumental collection of Prague indie musicians whose day jobs include set designer, programmer, archeology archivist, record distributor, 7th grader, logistics dispatcher, doctor, telephone repairman, hospital orderly, sociologist, spy, dog, computerchip engineer, and BBC radio broadcaster. Since its inception on December 25, 2004 above the new Delvita supermarket in the Zizkov district of Prague, Atlantic Cable has transmitted live from Poland, Moravia, Germany, Finland and Sweden with plans for France, Austria, Switzerland and Spain and Moravia in October 2005. The primary Atlantic Cable lays on the floor of the Atlantic stretching from Ireland to Newfoundland and was the first transatlantic telegraph cable uncoiled from the hull of the steamship The Great Eastern, the largest of her era, in 1866. New York’s City Hall was nearly lost to fire due to the jubilant mayhem in the streets celebrating the first transmission by Queen Victoria. Firefighters were barely able to reach the blaze before it raged out of control. It was while working on a project to increase the transmission capabilities that Thomas Edison accidentally invented the phonograph. www.atlantic-cable.org www.myspace.com/105656761