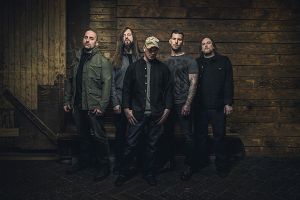 With just weeks until the release of their highly anticipated eighth studio album, All That Remains continue serving up powerful hard rock anthems. The New England-based band will release their Howard Benson (Halestorm, Papa Roach, Chris Cornell) produced record, Madness, on April 28th via Eleven Seven Music. The album has already seen massive success, reaching #1 at metal radio in the US with the first few singles – which can be heard in heavy rotation on Sirius XM’s Octane and Liquid Metal.

Today, All That Remains have shared another track off the album. The song, entitled “Louder,” ebbs and flows between moments of melodic, guitar driven riffs and heavy, head-banger bars, swelling to a full on pit-ready breakdown complete with a frenzied guitar solo. Vocalist Phil Labonte follows the flow of the track, perfectly switching from clean vocals to guttural howls and enhancing the songs message of standing your ground. You can feel his conviction in the lyrics, “The truth is loud no matter where you hide. Sleep walker, fear monger, I make the rules you ain't got nothing on me.”

ALL THAT REMAINS è presentato in Italia da LIVE NATION

Tutti gli eventi per all that remains