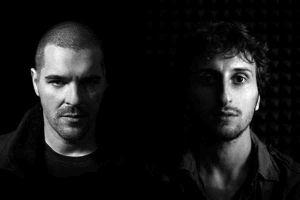 Zeitgeber is a German word that, loosely translated, means “synchronizer.” It’s also the new project of Electric Deluxe head Speedy J and Stroboscopic Artefacts’ boss Lucy. Both artists make some of the most forward-thinking techno around, but Zeitgeber sees them pushing together even further into uncharted territories. Freed of dancefoor considerations, the duo have constructed an album that breathes with life and rewards close listening. That’s no surprise when you consider the artists involved. Speedy J has been around from techno’s very beginnings. Based in Rotterdam, his Electric Deluxe label has consistently released techno that has gleefully tugged at theconstraints of the genre. Lucy, on the other hand, is a newer name to most techno fans, but his Stroboscopic Artefacts label has quickly made a name for itself as one of the leading purveyors of the stuff. Unpredictable and exciting are two words for much of what you get on SA. And that most defnitely applies to Zeitgeber the album as well. The album kicks into life slowly with “Closely Related,” a track that sounds like a motor unsuccessfully revving up, its attempts extinguished every so often by a plate of molten glass. “These Rhythms” lives up to its name – as long as the “these” of its title is pronounced in an incredulous way. “Skin” devolves into white noise by its fourth minute, pulls itself together (barely) and then slithers onward like a snake that’s stuck in a desert looking for someone to poison. It should be mentioned (if you weren’t sure already) that none of these tracks sound like conventional techno. They’re typifed by the careful and exacting sound design of much of Speedy J and Lucy’s work but it employed to almost completely abstract ends. It’s only on “None of Their Defects” that a beat proudly comes to the forefront. True to form, though, it’s heavily swung and eventually gives way to one of the most emotional melodies of the album. “From Here” follows a similar path, building from a few simple elements to a chittering and complex fnale. “Now Imagine” shudders and quakes across its ten minute length, every single one of them completely necessary to make its point. “Before They Wake” is a gentle lullaby that hides multitudes under the calm surface. The album concludes with “Display 24” a track which seems to have taken a choir from Popul Vuh and stretched it out to epic lengths underneath a clanking, industrial-sized rhythm. It’s a terrifying ending to an album that doesn’t often let the light in. That’s by design, however. Because when Zeitgeber do let the light in, it’s all the brighter. You’d expect nothing less from two of the most talented producers in the techno world. The culmination of 18 months of work, Zeitgeber is an album that is a collaboration in the best sense. Two artists urging other to new heights and new sounds. www.residentadvisor.net/news.aspx?id=19367‎