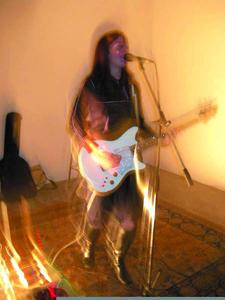 Winterbloom is a musical weave of rhythmic guitar, loops, and sultry, soaring voice. The project was created during the dark months of the year as a response to the winter hiatus of Shannon's first and long term band. Needing a musical outlet as well as a self-contained project that could tour without limitations, Winterbloom was created. This wasn't an easy project to create initially. Shannon's favourite music has always been from bands and her musical tradition has always been to create within a group. In Winterbloom Shannon has achieved a sound that strays away from the traditional singer/songwriter path and stays true to her love of a full band sound. In the fall of 2005 Winterbloom toured Europe playing shows in Budapest Hungary, many towns of Italy, Hamburg and Leipzig Germany, and Aalbourg Denmark. Winterbloom is currently working on recording a full length album to be released in the fall with of course more European touring. www.myspace.com/winterbloomlive