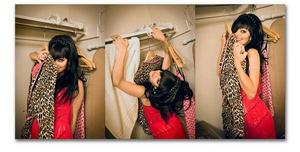 Former Disney Star Turns Woman of Mass Destruction ! When Christa Collins (formerly Christa Larson) joined the Woolly Bandits in 2007, she had not performed since a guest appearance on Michael Jackson’s “Heal the World” in 1991. As Disney’s first recording artist and the prototype for the child music star (Christa Larson – Minnie and Me), her career was on a trajectory for stardom. And then tragedy struck. While on tour in Australia supporting her new CD, Christa’s mother, Denice, was killed by a hit-and-run driver. Christa was no longer the same girl after losing her mother, manager, and guiding force. Disney released Christa from her recording contract shortly after. It would be years before Christa returned to the stage. Christa might have thought she was done with music, but music wasn’t done with her. Recognizing a born performer with a voice too good for the sidelines, mutual friends prodded Christa to dip her toes back into musical waters with The Woolly Bandits bass player and founder, Rik Collins. Disney’s loss was The Woolly Bandits gain. Although The Woolly Bandits were actively touring and recording before Christa hit the scene, when she stepped into the band, she set off some kind of musical chemical reaction that sent the band’s evolution into overdrive. For Christa, heading back into the spotlight unleashed the pent up front woman kept inside for so long, making every performance more of a purging than a simple gig. Woolly Bandit fans get to revel in the explosion at every show, but they don’t get to just sit back and take it all in. The band demands energy from the audience, and they get it. Even if chin stroking is your usual show stance, you’ll be up front and dancing with The Woolly Bandits before you even know what hit you. Being witness to things like the world’s only tandem drum solo doesn’t hurt when it comes to getting the crowd revved up, of course, but the good times happening on stage have a way of bringing out the Woolly Bandit inside everyone in the room. In 2009, Citation Records took notice and snapped up The Woolly Bandits. Their Citation debut, Woman of Mass Destruction, is drawing whispers of “instant classic”. It’s combination of modern rock meets retro sensibilities says, sure, we’ve got Jack and Meg, The Pixies, No Doubt, The Pretenders and yes, The B-52s in our record collections, but if you try to describe it, bet you can’t pick just one. Fans that have been with the band for the whole ride won’t be disappointed. New fans will simply be glad there is a band that can curate the past, pick the good stuff for inspiration and come up with a sound that is thoroughly modern and unrepeatable. The Woolly Bandits will be on tour in the US, Canada, Europe and Japan in early 2009/2010 in support of Woman of Mass Destruction. www.myspace.com/woollybandits