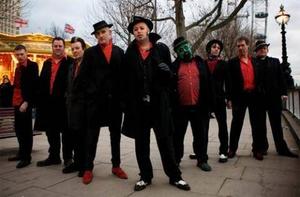 THE URBAN VOODOO MACHINE: A London collective of shadowy ne'er do wells, led by Norwegian born Paul-Ronney Angel. Featuring between 7 to 12 musicians playing guitars, drums, fiddle, trumpet, banjo, washboard, upright bass, gong, mandolin, accordion, harmonicas, saxophone, tuba, sousaphone and even empty bottles & tie racks to build their unique brand of Bourbon Soaked Gypsy Blues Bop'n'Stroll… "With their lurching sea shanties, debauched murder ballads, messed-up tangos and whiskey-soaked gypsy stomps, some reckon they're from the same stable of stallions as Tom Waits and Nick Cave; others point out the last gang in town swagger of The Clash and the hellbound blues that John Lee Hooker first dragged out of the swamp" IN THE BEGINNING: The stars were aligning in the skies the night Paul-Ronney Angel was begged by a promoter to be the filling in a triple bill sandwich. Never one to turn down a knees-up, P-R realised he had 48 hours to put a band together. No problem. Trawling the dives and doss houses of London, he called in some favours, cracked some whips, and so it was that The Urban Voodoo Machine was cranked into life. That was April 2003. Ever since then, this shadowy collective of ne'er-do-wells has been bringing the spirit of the Carnie to London, sleazing around the capitals' seediest joints, as well as hosting the now legendary parties attended by strippers, fire jugglers and degenerates. 2005 - 2006: Igniting a spark in the dark underbelly of the city, the fire quickly spread so that by 2005 appearances were confirmed at Glastonbury Festival, Lost Vagueness, Edinburgh Festival and Ireland's Electric Picnic Festival. To give their audience something more than a black eye and an empty bottle to take home they recorded and released their 5-track debut EP "Ladies and Gentlemen, The Urban Voodoo Machine". Their ways as infectious as their voodoo is dark, the desperate thirst for their wrong ways continued into 2006. Latitude Festival and the Spitz Blues Festival snapped the band up whilst The Electric Picnic made them the only band to ever be booked 2 years in a row. This year also saw them perform to their biggest London audience yet at the Lost Vagueness Halloween Ball playing to over 1700 people. Legendary parties turned into legendary club nights and in October 2006, 'Gypsy Hotel' was born to coincide with the release of their 2nd EP 'With love from the Urban Voodoo Machine'. Once a month, the band headline and sell out an excitingly eclectic rock n roll cabaret 2007 was a great year for The Urban Voodoo Machine. They kept to a hectic schedule of headlining stages at many festivals (Glastonbury, Latitude, Edinburgh etc.), playing their own sold out shows around UK & Europe, running their hugely popular Gypsy Hotel club night and swelling their already considerable fanbase. 2008 was spent in the studio in London, recording their first full length album. They hit the road again in March to perform with The POGUES on their USA tour (by personal invitation of Spider Stacy). Which in turn led to them being offered the full UK & Ireland X-Mas 2008 tour with The Pogues. 2009 saw the release of debut album 'Bourbon Soaked Gypsy Blues Bop'N'Stroll', on Gypsy Hotel Records to great acclaim. The album scored top reviews in all the major music magazines and made 'Albums of the Year' lists in Classic Rock magazine and Big Cheese magazine. This was backed with lots of live shows and touring including headling East London's prestigious and beautiful Hackney Empire and joining the legendary New York Dolls on their UK tour. 2010 As always a busy live schedule started the year in Norway, on to Hungary in the Spring and even a football stadium in the Ukraine alongside Goran Bregovich. The Summer brought a lot of festivals including Download for the first time and an invitation to open for Paul McCartney at London's Hyde Park. Much of the year, again spent locked away in the studio recording second album 'In Black'N'Red', pencilled for release early 2011. www.theurbanvoodoomachine.com