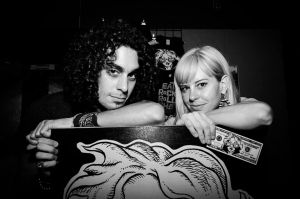 "They may be all but just two people, but The Two Tens are a hot new L.A. duo to be reckoned with. Made up of Adam Bones on the punk rock vocal vibrato (and shredding guitar), and Rikki Styxx playfully pounding away on the skins, The Two Tens exude a ferocious sound live. The band just released three back-to-back EPs, with a fourth on the way, and we don’t see any signs of them letting up." - Los Angeles Magazine

"Garage punk at its best, "Scene" is a high energy explosion of sound that hits its mark from the first outburst, making one wonder how it can possibly come from a band made up of only two people." - Huffington Post

“The duo of Adam Bones and Rikki Styxx are set to unleash their fantastic barrel of fury in the form of Volume, a record you should get familiar with right now.” - Purevolume

"The Two Tens serve up lightning-quick garage rock that turns the clock back to first-wave punk. The single “Scene” persistently asks “Where’s your scene?” and delivers an answer in just over two minutes: Wherever you’re keeping your old Ramones vinyl." - Buzzbands LA

"After catching The Two Tens live this past Tuesday night at the Satellite, I wouldn’t be surprised if their plans of “Taking over the world!” would actually see its fruition. The new Los Angeles-based duo composed of all but two people, Adam Bones (guitar/vocals) and Rikki Styxx (drums) playfully ripped through a 40-minute set of pure garage grit. Blasting out hard licks from their collection of three EPs, The Two Tens put on nothing short of a robust performance." - Grimy Goods

"This brand spankin’ L.A. duo takes a White Stripes vibe up to the Hollywood sign via some bright sonic swing." - CMJ

"Styxx ‘n’ Bones will never hurt you, but they sure will leave your ears ringing for a few days… As The Two Tens, though, they’ve apparently found their calling and have been compared to everyone from Ramones to White Stripes to sundry Nuggets combos. Have they got it going on, or what?" - Blurt Magazine

"The Two Tens summon the frantic, fuck-all energy of the Ramones, if the Ramones had smiled a lot more and sneered a lot less. If these two are as fun to watch live as they are to listen to, tonight will be the most dumb fun you've had since pogoing at your first all-ages show." - The Portland Mercury

"The colorfully monikered Adam Bones and Rikki Styxx are more overt in their intentions: They want to rock. And rock they do. "Volume," The Two Tens debut full length, on the other hand, is a verifiable killer. The opening pair of bashers, “Scene” and “Ella Don’t Like My Hat” parade their hooks and attitude like impudent schoolchildren. Guitars gnash, snares rattle, Bones sneers, and somewhere Rodney Bingenheimer’s ageless heart beams." - The Big Takeover