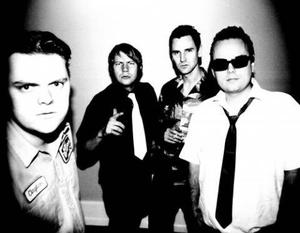 They are here to put the URF! back in surf! They love tremolo, they love beer and they've got guts! The Tremolo Beer Gut is the premier retro-surf-rock band on the planet. Their records explodes with original yet classic compositions, recorded boldly in mono, dual stereo and whichever way the band damn well pleases. Live the band kicks some serious butt. Always a dangerous but enjoyable encounter with tons of smoke from their industrial strength smoke machine. The TBG are cool, sexy and evil (good evil, not bad evil)! Old school style! On the surf and garage rock scene TBG has made a quite name for themselves after 4 amazing album releases and tons of shows all over the world – from USA to Russia and back. They opened the 60.000 capacity main stage of the Roskilde Festival in 2000 with added male choir, mandolinplayers, thermins and organ, but for maximum enjoyment catch the band at a sweaty, packed club. Grab a tall drink and your main squeeze and that's the most fun you can have outside of a double bed. Yessiree – The Tremolo Beer Gut is IT. The Tremolo Beer Gut plays old school surf & western, a genre they've thought up themselves, which draws inspirations from the ultracool rough twangy guitar sound of 50s' and 60s' surf as well as the great film music of Mancini, Barry and Moricone. The songs are short and instrumental (apart from occasional shouting and carrying on). Almost all the material is original but the Beer Guts also play surf versions of songs from Kraftwerk, Sonic Youth and more. Old school is the key words for The TBG. They were the first band to release a MONO album in the new millenium when they released their second album in 2000. The band loves the old exotic ground breaking productions of Phil Spector, Brian Wilson, Joe Meek (and many others) much more than the clean, dry hi-fi stereo of today. And deep in our hearts: Don't we all? As the intelligent music fan will notice the artwork for all the TBG releases are more or less the same. Under the motto: ”don't fix it if it ain't broke” they decided that their first 7-inch was so beautiful that they only changed the colours for their subsequent releases. The band was founded by Jesper “Yebo” Reginal and Sune Wagner in 1998. After The Raveonettes took off in 2003, Sune had less time to play with TBG and therefore their producer and sound-engineer gradually took over the lead guitar as they have toured Scandinavia and Germany in recent years. Today The Great Nalna is a full-time member of the band and Sune concentrates on The Raveonettes. With this improved line-up The Tremolo Beer Gut are in excellent combat condition. www.facebook.com/thetremolobeergut