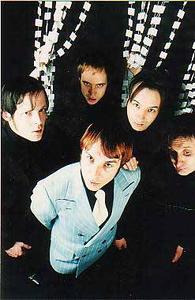 THE CHEEKS present RAW COUNTRYSIDE Climb up a wall of magical pop sounds and catch its cynical echo from the other side...Once upon a time there was a true friend in his domicile on the raw countryside of Languedoc in southern France. He cast a spell on THE CHEEKS, took out his whistle and seductively lured them over to his refuge, where the conceptional idea of their third album happened to be born...Breathing the spirit of The Middle Ages original resistance, being aware of the myths and the sagas, every moment had a profound effect on the fivesome. Add the inspirational vibe of fave artists like The Byrds, Arthur Lee & Love, The Zombies, The Kinks, The Left Banke, The Flamin' Groovies, Teenage Fanclub... and you can get an idea what came out of it…Back home THE CHEEKS immediately started to build up a playground for their experimental sound visions at Augsburg's Echolot Studios. Amazing producer Alaska Winter and studied film composer Ingmar Lauer worked out the group's orchestral arrangement ideas with the result that even the toughest retro-rock fan must agree THE CHEEKS in 2006 invented their very own sound!On their new record RAW COUNTRYSIDE you can hear it all: The chimes and the bells, the banjos and mandolins, the oboes and harpsichords and 12string guitars… let the violins wine in melancholia and the trumpets blow in triumph…Shimmering guitar glissandos and relevant '60s West Coast influences characterise the two songs on the pre-released JUST A GOOD BOY / CALIFORNIA FALLING INTO THE OCEAN - EP and give a tempting preview of THE CHEEKS' trip between heaven and hell.It has received airplay and reviews in the US, UK, Argentina, France, Spain and Germany. By the way: Keep your radio on for the upcoming single VIVIENNE WESTWOOD, a dance-floor-shaker powered by a soulful brass section.Now and then:Their first jangling note was brought into being Dec. 95' after the Cologne based powerpop label-institution Screaming Apple Records pressed THE CHEEKS' early talents onto a shiny piece of black vinyl. A little later the double A-side-7" THERE'S A PLACE / WHAT DO YOU WANT ME TO DO (by The Pointed Sticks) appeared on a Canadian radio station. The beginning of the band's self-conception for playing export-music,Since then THE CHEEKS have performed numerous times on international stages. In 2005 they presented their new material at Madrid's cult Rock'n Roll-Club El Sol and the fabulous crowd of music lovers bought all THE CHEEKS' merchandise stuff right after their thirty minute opening show, leaving empty t-shirt and record-cases for the next night…The enthusiastic audience at Liverpool's legendary Cavern Club honoured their riotous gig by voting THE CHEEKS into a Top 10 artist-list of The International Pop Overthrow Festival(Liverpool/May 29th 2005).Now!! Get ready for THE CHEEKS upcoming release on the fresh, young label Beyond Your Mind Records, distributed by Cargo Records: RAW COUNTRYSIDE (LP/CD) will be in stores and available via mailorder on October 27th 2006. thecheeks.de www.myspace.com/thecheeksdothepop

Tutti gli eventi per the cheeks