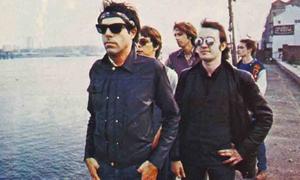 The history start when Robin Wills(who came from Swiss and guitarist in a band called "Lou Chrysler et les Moustiquaires") meet Jeremy Gluck (from Canada and members of the "Yohawks"). Robin left his current band the Unwanted to form R.A.F with Jeremy and rapidly they become the BARRACUDAS, title of a Standells song they loved. 1978, they played in lot of London clubs. Line-up was Jeremy Gluck-vocals, Robin Wills-guitar, Starki Philipps-drums and Adam Philipps-bass. The Philips left the band, David Buckley(ex-Skyscrapers) on bass and Nicky Turner(ex-Raincoats)-drums joined the Barracudas. One year later, George Hann(huge Barracudas fan) offer them to produce their first 7". 20th June 1979, they recorded the 7" for CELLS Rds, reissued later with same picture sleeve. The picture was taken by Ms Buckley. The two tracks are "I want my woody back" A side and "Subway surfin" on B side. They maybe could be classic surf, but the guitar sound is more in the style of the Ramones than the Beach Boys. .. .. width="425" height="350">..........> .. Their reputation of surf revival band grow up in London, and EMI throught Zonophone sign the band. To refer to the 60s surf scene, the label hope make more money in case the band look like early bands, so the picture sleeve of their 2nd 7" is a 'classic' 60s surfband picture(funny for a band out of the punk rock scene). Released in June 1980 "Summer fun" is produced by Kenny Laguna; the sound is great but less electric than "I want my woody back". It's the first song composed by Robin Wills. "Chevy baby" B side is composed by Gluck/Wills and produced by the band. The French pressing is on Pathe Marconi. The original 7" was issued with a sticker ('surf and destroy').. The second release on EMI come in October 1980. A three tracks EP, "His last summer" produced by Pat Moran and John David; the B side is an instrumental "Barracuda waver" and "Surfers are back!" . All are composed by Wills. They payed homage to their Californians idols like the Surfaris on the label of "Summer fun" aswell to Jan Berry(Jan & Dean), a little anachronistic in London '79-'80 as there is a big mod revival in UK. Lot of bands would like to sound like the Who or the Small Faces. A new start in the Barracudas story,as they don't get succes they are looking for with their surf tunes, they refuse to play their surf material on stage. Now they revisited 60s american psychedelic with their single "I wish it could be 1965 again", on the beautiful picture sleeve they have a punk sixties look. Produced again(and well) by Moran and David. The lyrics of "1965" refer to 60s in USA. The B side is "Rendez-vous". Rapidly, February 1981, a new 7" is released "I can't pretend". This record is important as it show what the band will be later, the Robin' Rickenbacker sound is more aggressive. "I can't pretend" is composed by Wills. The B side "KGB" by Gluck/Wills is a song against all form of dictatorship, produced by the BARRACUDAS. The picture sleeve show band in psychelic clothes(Carnaby Street?), this photo is shooted in the same session doing for their awaiting 1st LP. In fact, the 7" is released to promote their "Drop out with the Barracudas" LP. One of the best LP from 1981. Zonophone want 4 hits on this record, but all the tracks are good. There are ballad like "Somewhere outside", melodic tunes "This ain't my time" "I can't pretend" or "1965" aswell more aggressive like "Somebody". Their psychedelic obsession is significiant on this LP with "We're living in violent times" and "I saw my death in a dream last night". The only cover "Codeine" is a Charlatans song. This Lp is issued in France on Pathé Marconi and in Australia with a different p.s.. This picture sleeve will be the same in USA on Voxx Records(Bomp). But the americans take "Surfers are back" and not "Campus tramp", not a real good idea. After the mods and the rude boys, the neo-psychedelic revival is now in London. They have their bands, their shops... Of course, the BARRACUDAS are they favourite, but the band don't want to be inclued in this revival. The compilation "Splash of colour" feature an original Barracudas song "Watching the world go by". Then they go to Paris, and do two gigs at the 'Rose Bonbon'. But EMI is complaining they don't make money with the band so the BARRACUDAS are sacked. But in the band itself Buckley is sacked! And Nick Turner joined Stiv Bators and Brian James to form 'The Lords Of The New Church'. Bad days.... Hopefully Wills-Gluck stay together and meet a bassist from Australia, Jim Dickinson (ex-Survivors -Passengers -C.Bailey band). They try to find a new drummer as Graeme Potter for a short time. Finally they signed c/o Flicknife Record. In meantime the band is very surprised to see a promo EP out on Bomp(Sept.1982), 4 demos from 1980 inclued "Surfer Joe"(Surfaris) and "You were on my mind". The first Flicknife record is a 7" out in February 1982, a terrific 7". The BARRACUDAS are back! The picture sleeve isn't very nice, but "Inside mind" and B side "Hour of degradation" are absoluty great! A few time later they recorded again and they meet Chris Wilson(ex-Flamin Groovies) another idol of the band. Chris played now rythm guitar in the BARRACUDAS. But unfortunately Flicknife go bankrupt! ( BIO COURTESY OF MOD POP PUNK ARCHIVES) www.myspace.com/barracudaspop

Tutti gli eventi per the barracudas