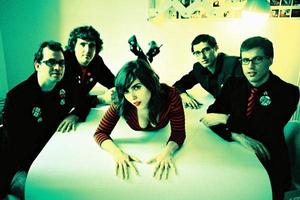 In the beginning there was just BB and Suzy, recording demos on a 4 track just for fun, playing Chris Stein and Debby Harry. Then, as an anniversary present to themselves, they decided to record a proper demo at Coky's (ex-Shock Treatment) Rockaway Studios with Tommy (ex-Depressing Claim) sitting in on the drums. It was so fantastic that the minute we heard it, we loved it and knew we had to release it. And listen buddy, we weren't the only ones, because it's been flying off the No Tomorrow shelves ever since. That was two long years ago, and now S&LQ are a kick-ass rock and roll band, after Suzy and BB added Coky, Tommy and Johnny Quattro to the team. Since then, they've released records on Germany's Screaming Apple and Japan's Wizzard-in-Vinyl, recorded and toured with TV Smith of The Adverts and have been playing live all over Spain and also briefly in Europe. And they did it all before releasing a full-length album! Now finally, the album we've all been waiting for is out, and man, was it ever worth the wait! The amazing thing about Suzy & Los Quattro is that they can sound not just pure and sweet, but sexy and exciting, and all at the same time. Take our word for it--the band's special charm shines through every groove on this record. But don't forget those songs: hook-filled and well-crafted rockers powered by Suzy's vocal chord shredding but amazingly sweet and clear voice (shining through like never before) and BB's clever vocal harmonies. And the production (by Coky Quattro) is just awesome: loud, crunchy and crisp, this sounds like a band to reckon with. The result is nothing less than awe-inspiring rock and roll, filled to the brim with fun and good vibrations. Ignore it at your own risk! www.myspace.com/suzyandlosquattro