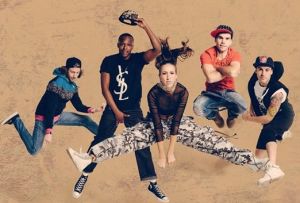 The band has formed in 2015 thanks to Sara and Andy.

Sara is an Italian singer with 10 years of experience in live music and entertainment. She has played around Italy with many Soul / R'n'B acoustic duos and trios. Moreover from 2010 to 2012 she has worked and toured in and outside Italy with Erik Udel, one of the bass players of Blues Brothers band.

The West is a dynamic and powerful rapper from the Midwest of America and has been entertaining for 10 years. He writes pop, R'n'B, Hip Hop and EDM songs for Italian artists throughout Italy. He is affiliated with several records labels in Italy and America and has graced iTunes, Beatport and other music charts with his singles.
His raw energy and natural ability for entertaining leave audience's craving for more.

Andy is in the music business since 2010. He has recorded albums and toured all Italy with reknown artists such as Paolo Meneguzzi, Sonohra, Hevia. Recently he came back from Thailand after playing for four months with his own Rihanna Tribute Band (rehabofficial.com) in the most beautiful music hall of Phuket called Illuzion Club.

Alessandro is one of the most young-skilled and requested bass player of North Italy. He is a composer, arranger, rapper, and the singer of Attic Room. He recently came back as well from Thailand as he is the bass player of Rehab, Rihanna Tribute Band.

Pietro is a skilled guitarist, composer, producer and arranger. He is currently playing for the band "Clever Delights". He works as well in a recording studio in Northern Italy.