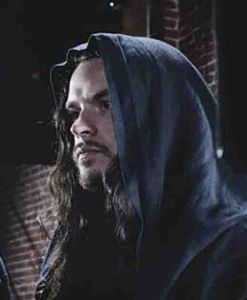 "Thunderous resonant sounds call from beyond the depths / And the winds of gravity change / In memories of the consciousness of the ancient rocks / Nature's answer to the eternal question" Sunn O)))/Attila Csihar – 'Aghartha' Stephen O'Malley has become increasingly interested in the spatial/acoustic potential of his/Sunn O)))'s brand of sonic insurrectionism. Whether it's his formative appreciation of Keiji Haino (and his privileging of space over tone) or the multi-channel spatialisation work for the Gisèle Vienne-directed theatre collaborations (under the KTL moniker), O'Malley has increasingly sought to fashion a live experience that explores/exposes the limits of space and place as much as duration. On Saturday, the setting of St John at Bethnal Green provides as good a frame as any for such an architectural analysis. O'Malley has often discussed the insular self-reflection/self-examination that these relatively nascent live solo performances allow him, and tonight is no different. Standing to the right side of the stage, letting the amps take centre stage, he presents a one-hour performance that is a markedly different beast to his work with Sunn O))): simultaneously less tightly structured in its ebbs and flows, yet with a distinct sense of pared down simplicity. The lack of distinctive rhythm/percussion within the Sunn O))) catalogue is usually banded about as some kind of demarcating USP; however, when you dig a little, much of their material is infused with rhythmic progression (particularly on the Attila Csihar collaborations). However, along with Sunn O)))'s 2014 demo LA Reh 012, O'Malley's live solo work is perhaps the most truly arrhythmic work he has produced to date. The chord progressions are achingly slow; hanging in the air as the space of the building fashions it's own rhythmic reverberations.