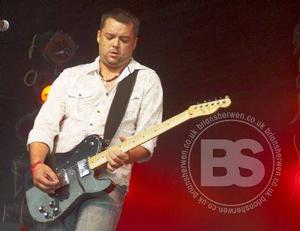 . Sean Webster is the brilliant front man guitar vocalist for the 3 piece band with a great reputation on the British Blues and rock scene. Since forming in 2003 they have been making great headway both in the U.K and Europe. 2004 was a big year for Sean, as he released the debut album “Long Time Coming”. This put the band in the public eye for the first time, and showcased Sean's fine guitar playing, which combines a great number of influences including Albert Collins, Eric Clapton, Mark Knopfler, Gary Moore and SRV to name a few. His vocal style is of a rich, sexy tone with a low end rumble drawing comparisons with Joe Cocker, Bryan Adams and Jonny Lang. Britain's leading blues magazine “Blues Matters!” has described the debut album as “A real gem”, concluding that Sean was: “…. set for big stages with superb guitar work…. They'll soon be bursting out of the Nottingham area now Sean has got his writing shoes on.” 2005 saw the band perform many live dates around the U.K. including main stage performances at, Burnley Festival, Maryport Festival the prestigious Great British R&B Festival in Colne in August with organisers quoting, “ Sean is a new legend in the making. He has rich powerful vocals and searing guitar licks. Like so many, he has been working hard for years but these are Sean Webster's years, and he is in his ascendancy”. Sean's second cd release entitled, “ If Only” pushed the boundaries of the blues music, with Sean reaching out to a wider and (often) younger audience. “ If Only” came to the attention of Tony Edser, editor of “ Where`s Eric! “ the official Eric Clapton magazine who decided to feature Sean as The “ One to watch ”. Having personally placed a copy of the cd in Eric`s hands, it has been rumoured that Sean may be inline for supporting Eric in next years tour. An extract reads, “This is an original collection of blues based songs, skilfully played, nicely produced and with some beautifully melodic guitar work. If Eric is stuck for a decent support act for his forth coming Euro tour, he need look no more “. Sean recorded a live session for the Paul Jones show on BBC radio 2 which was aired in September 2006, enabling some 500,000 people to hear Sean's music. He regularly has his music played on radio stations around the world, including Bosnia, Canada, Spain, France, and Germany etc. As well as performing various dates throughout the U.K. he has just returned from a very successful 5 week tour of America, taking in Chicago, Minnesota, Houston, Galvaston and Austin Texas. Aswell as having a great learning experience he had the chance to meet up with Jimmie Vaughn and Doyle Bramhall II. Check out the pictures page. The double album " Live and in Session " is now out and available at gigs and via the website. Sean hopes to continue his growth in the music industry and bring his music to new ears, both young and old. Sean has something for everyone, make sure you catch him at the earliest opportunity. http://www.myspace.com/seanwebstermusic