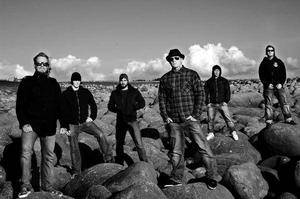 Dissecting the name of the band Purified in Blood and the name of the album "Under Black Skies", I hardly believed this was going to be littered with rock ballads and / or displays of lyrical affection to a loved one. Spinefarm Records is the third element which reminds you that this will not be the type of music you play when trying to woo a member of the opposite sex after a first date (unless they are partial to a bit of Heavy Metal that is) – I imagine Barry White's tunes will be safer. From the thunder crack and stormy sounds of the intro, 'Summing Storms', I knew this would be an echo of the dark, emotional music which would follow. After the second track 'Thunderheads' terrorised my stereo I realised that although the vocals were along the heavier, growling nature of most, dare I say 'metal' bands, this record was surprisingly accessible. My immediate reaction was also to credit the production, as it found a perfect mix of all of the elements and channelled them in such a way that it was very easy to pick out various sections and enjoy them on individual merit. After the second track, 'Death Priest' I was sold on their musical ability and this came across as a mature, well-written project. Fearless of comparisons, Purified In Blood take appropriate steps to ensure they stay a cut above the rest, including past acts whom they have supported; Slayer, Mastodon and In Flames to name but a few. Heavy guitar riffs with flurries of screaming solos and sweep picking arrangements show the band to be no fools when it comes to delivering the goods. Often these albums have a few tracks which you find yourself disliking early on and reaching for the 'skip' button but, "Under Black Skies" builds with each song and I was hopeful that the band could produce some epic pieces of work on this album. Track five, 'Beneath the Pyre' is a perfect example of where Purified In Blood could have doubled the length and taken the listener on a longer journey, because it had the potential of a very strong number. Sadly it ends prematurely and this is a shame. I started to feel moments of Machine Head in their output towards the end of this album and I've warmed to this band throughout the experience. I'm going to throw a quote in from Purified In Blood's guitarist Tommy Selva, who says this album “...reflects a decade of terror and decay. It drags you down and rips you apart”. Enough said! On face value, I thought I might have been in for a really brutal ear pounding, but in reality this is a likeable and credible release from the Norwegian group and I believe this will be the record which puts their name on UK and US maps. www.myspace.com/purifiedinblood