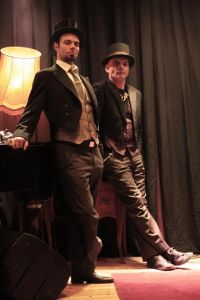 “Opera Chaotique”, created in May 2011 by Tenorman and Voodoo Drummer, have already given a series of successful performances in Berlin, Paris, Barcelona, London, Athens, Belgrade, Bucharest, Budapest, Wroclaw, Ankara, Portugal and Italy, while they have cooperated with Jolly Jumper (NR), Louisiana Red, Bob Brozman, Blaine Reininger and Angela Brown (US). In May 2012, the Death of the Phantom of the Opera” was released, a surreal story of the Phantom of the Opera, who travels to New Orleans and has a turbulent relationship with Voodoo Queen, that ends in a tragedy.. http://www.operachaotique.com https://www.facebook.com/operachaotique https://twitter.com/OperaChaotique