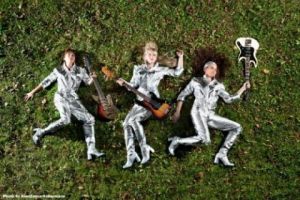 3 LADIES 1 MISSION: BRINGING HOT MUSIC TO THE COLD RED PLANET. BIOGRAPHY The Band: MARS NEEDS WOMEN are three women with one mission: to bring Rock'n'Roll to the planet Mars ... If you think about it, it’s a bit of a mystery that Mars Needs Women first came into existence in 2013. After all, the three protagonists have known each other for more than a handful of years and have played in bands together in the past. And their common love for a certain kind of music should have made it a no-brainer. But for all things a season and so it was with this band. The first hour in the practise room confirmed what they already knew. This was communication without words, a musical understanding that needed no explaining, discussing or dissecting. Oh, and it was so much fun! When they decided to record some of this fun for prosperity, they quickly turned to Hamburg’s Master of Hi-Fi Lo-Fi, Ted Gaier (Goldenen Zitronen/ Robesspieres). Another match made in heaven! It all seemed like too much of a good thing when the Ärzte drummer, Bela B. then offered the band a berth on his good ship B- Sploitation’ (Bela’s new label) . They graciously accepted . The 7” single will be released on the 21.11.2014, followed by the album in march 2015. They have their homebase in HAMBURG/GERMANY. Mars Needs Women are: Peta Devlin (vocs, bass) Barbara Hass (git, back vocs) Susie Reinhardt (dr, back vocs) Discography: Debut-Single coming out 21.Nov. 2014 Debut-LP coming in Feb. 2015