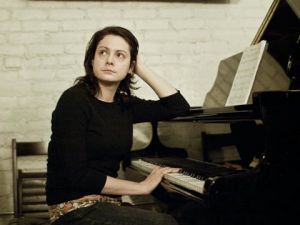 Pianist-composer Kris Davis has blossomed as one of the singular talents on the New York jazz scene, a deeply thoughtful, resolutely individual artist who offers “uncommon creative adventure,” according to JazzTimes. The Vancouver-born, Brooklyn-residing Davis was dubbed one of the music’s top up-and-comers in a 2012 New York Times article titled “New Pilots at the Keyboard,” with the newspaper saying: “Over the past couple years in New York, one method for deciding where to hear jazz on a given night has been to track down the pianist Kris Davis.” Reviewing one of the series of striking albums Davis has released over the past half-decade, the Chicago Sun-Times lauded the “sense of kaleidoscopic possibilities” in her playing and compositions.
Long favored by her peers and jazz fans in the know, Davis has earned high praise from no less than star pianist and MacArthur “Genius” Grant honoree Jason Moran, who included her in his Best of 2012 piece in Art Forum, writing: “A freethinking, gifted pianist on the scene, Davis lives in each note that she plays. Her range is impeccable; she tackles prepared piano, minimalism and jazz standards, all under one umbrella. I consider her an honorary descendant of Cecil Taylor and a welcome addition to the fold.”