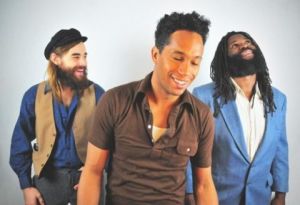 BLUES-SOUL-RNR FROM MISSISIPI BIOGRAPHY In December 2010, Mike sold his bass and bought a drum kit. Pierre bought a cheap microphone and plugged it into a practice amp. Like their good ol’ days growing up in Jackson, Mississippi, they were playing the blues! Within weeks of forming their two-piece juke group, they met Ryan Lynn. The friendship came immediately and once Ryan picked up the bass, the music quickly followed. By combining musical elements from the genres they loved, the songs poured out in an inspired fury. Only three months after meeting, they chose the name of the folkloric slave hero, John the Conqueror, and took to the stage playing their own blend of the southern rock from their childhoods, the punk of their adolescence and the blues and soul they had always held closely. With a little help from the fabled John the Conqueror magical powers, they signed with Alive Naturalsound in 2012.