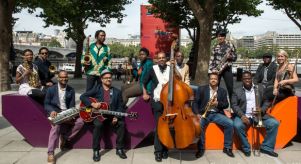 Jazz Jamaica All Stars is the first formally structured big band to play this particular blend of jazz. They reflect the Caribbean music tradition and demonstrate in vibrant and exuberant form its massive contribution to a living, constantly changing jazz tradition.

Jazz Jamaica All Stars released their début album, Massive (Dune Records DUNECD06) in October 2001 to immense critical acclaim and earned a place in the Top Ten Albums Of The Year in top critics’ ratings (The Guardian/The Times). In July 2002, Gary was presented with the BBC Radio Jazz Award for Best Band for Jazz Jamaica All Stars. Also in July 2002, he received an award from Jamaican music legends and Ocho Rios Jazz Festival directors, Sonny Bradshaw OD and Myrna Hague for Consistent Contribution to Music In Jamaica, earning him a place in the Jamaica Jazz Hall of Fame.

After more successful touring in 2003, 2004 saw Jazz Jamaica All Stars collaborating with one of the iconic ­figures in South African culture, Hugh Masekela in an exciting project to mark the 10th anniversary of ­democracy in South Africa. The music, specially arranged by saxophonist Jason Yarde, featured some of Masekela’s most evocative pieces as well as other seminal songs of freedom such as those by Bob Marley. A whirlwind of Caribbean and South African grooves! Vocal duties were shared by Juliet Roberts and Masekela, as well as massed choirs from East London schools – the culmination of an extensive education project commissioned by the City of London Festival and run by members of Jazz Jamaica All Stars and Masekela.

Jazz Jamaica All Stars and Hugh Masekela toured the UK and made a special appearance at the North Sea Jazz Festival, The Hague in June/July 2004

Since then, the band has toured a variety of sets including Motorcity Roots, Tighten Up! (a tribute to Trojan Records), and The Blue Note Blue Beat.

In late 2012, Gary reassembled his all star big band, Jazz Jamaica All Stars to headline the Lively Up! Festival marking 50 Years of Jamaican independence. In fact, more than reassembling the band, he supersized it with the addition of a strings section from Urban Soul Orchestra and reggae star, Brinsley Forde. Jazz Jamaica All Stars saluted the global and iconic superstars, Bob Marley and The Wailers in a massive musical extravaganza paying tribute to their seminal album, Catch A Fire  on a fantastic tour of eight UK cities that saw the band working also with a range of community gospel choirs.