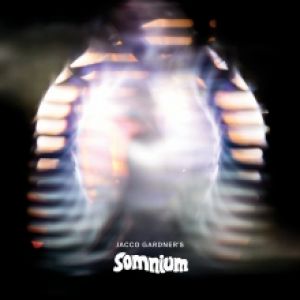 The quote, one wrapped in mystery and duality and a sense of change and exploration, is emblematic of where Jacco has been in the last couple of years. Holed up in Lisbon with a new love in his life, immersed in literature, cinema, philosophy and the winding streets of a new city to wander. “I think moving to Lisbon played a huge part of the album, as the city has a very mystical quality to it,” he says. “Especially in the older parts of the city, but also because of the hills it’s built on, wandering through the streets can feel almost like wandering through nature.”

The resulting album is not necessarily one that is representative of his new found surroundings in an obvious sense but more a depiction and projection of his thoughts and dreams whilst spent walking the streets; which he did whilst thinking about the books he’d been reading and imagining those world's put to sound. Jacco has been known to create swirling psychedelic pop boosted by his rich, resonate and baroque voice but on Somnium, his vocals are gone and in their place is an equally seamless melodic exploration but an instrumental one with a synthesised Sci-Fi edge.

Somnium is a nod to the novel of the same name, written in 1608 by Johannes Kepler and is regarded as the first ever science fiction novel. “This book fascinates me because it was basically Kepler travelling in his mind to a non-existent world while describing it, and his journey, with amazing detail. Many of his imagined sensations are actually really what happens when one travels into space, which happened almost four hundred years later. You could call it a vision of the future through his dreams, and I find this aspect very mysterious and powerful.”

This form of mind travel is what Jacco has set out to create in a sonic, almost alchemic, capacity. Hence the reason for his vocals to be left out of this spiritual journey. “I deliberately removed my voice from the experience, as it made it more difficult for me to achieve the intended state of mind. I think it makes the journey more interesting, more deep, and more intimate. I didn’t feel the need to show my face while one drifts away into thought. Somnium is a visionary experience. The album is more than just a trip, it is about contact with a deeper - hidden - reality.”

If the concepts behind this record sound otherworldly and intricately woven then Jacco has also succeeded in making a record that does the same. Analogue synths hum and glide pristinely, bass lines dance buoyantly, dense atmospheres build and form and thoughtfully crafted melodies come and go, floating around as though in space. There are nods to early pioneers of such dreamlike ambience and cosmic exploration - Bo Hansson, Vangelis, Cluster, Tangerine Dream, Eno and Oldfield (the album was mastered by Simon Heyworth whose production credits include the latter three, including Tubular Bells) - but it also exists as a futuristic pursuit, one that is chasing something ahead as well as exploring the past. This is because to Jacco both are equally valid. “The past has always felt very much alive to me and so full of mystery that I have to conclude that the present and the future are probably no different.”

Somnium is many things: an exploration in and around and between realities, an immersive cosmic journey through the creator’s mind - as well as your own - and twelve constructed tracks that are capable of plunging one into new dreamlike environments. Many of these are open to interpretation, with each listener likely to walk their own path, indeed Gardner's ideal listening scenario is for you to take the album for a saunter, consume it complete and without interruption. “Somnium could be seen as a tribute to the album, a dying format in today’s fast-paced society. It can often be difficult to enjoy a meaningful uninterrupted moment. This album is where true mystery and wonder is waiting to be discovered.”