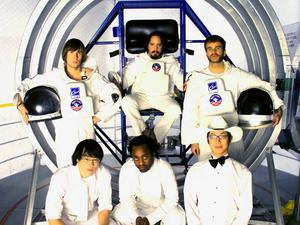 Islands sprouted out of the kindred x-ray vision of Nick Diamonds and J'aime Tambeur, two rag-tag youths from the weird side of the tracks. Previously, they'd worked together in sludge-crust band "the unicorns" and, after some time apart, met up in L.A. on the set of Woody Allen's film "Melinda Melinda Melinda". Unexpectedly, they'd both been separately cast in the pivotal "restaurant" scene, in small "walk-on" roles opposite each other. Their fierce competitive spirits kept the two from getting too close, but once the final cut of the film surfaced and they found both of their parts had been left on the cutting room floor, their dormant friendship had been rekindled, cloaked in mutual pity and despondency. After much deliberation, they agreed to return to the snowy climes of Montreal and jump headfirst into the often heartbreaking world of music. This time they'd be exploring a music best catalogued as "other", in what seemed a tribute to the timeless sound of great pop music, combining rhythms and sounds of cultures in the southern and eastern hemispheres, as well as a dash of "rap". "Return to the Sea" herein referred to as "their classic album" was recorded in the sweaty month of July while Islands was still a couple of lonely icebergs, not yet an archipelago. So local friends, including Richard Reed Parry, Regine Chassagne, Tim Kingsbury, Sarah Neufeld, Dan Boeckner, Spencer Krug, and l'il Mikey Feurstack lent their valiant efforts to the recording process. When their classic album was finished, Nick and J'aime set out on a search for the most exciting musicians in existence. On their travels, they encountered Patrice Agbokou, the Togo born bass player with the gift of "finger magic". Patrice's impressive resume, which included a short stint as Prince's bass player at age of 12, helped cinch the deal. Next to join were the magnificent Chow brothers, Alex and Sebastian, known to many as the 1993 and 1994 "World Super-NES-Fest" champions. Between the two of them, they play every instrument ever created, but are known to be particularly deadly on "Mario Paint Music Maker", which they play quite competently in the band. Islands wouldn't be complete without their resident heartbreaker Patrick Gregoire, breathing new life into the aforementioned classic album via his sexy bass clarinet (often foolishly mistaken for a saxophone), sometimes used as a stick with which to shake girls off. The group also boasts the genetically musical mustachioed James R. Guthrie, grandson to Woody and nephew to Arlo, and two of LA's finest rappers Subtitle (Giovanni Marks) and Busdriver (Regan Farquhar). Other guests sometimes peek out from corners. Their classic album will "drop" on April 4th, sometime in the morning, on Equator Records throughout North America and April 3rd on Rough Trade Records overseas. They will tour in support of it. You will love it. "Return to the Sea track listing": Swans (Life after Death); Humans; Don't call me Whitney Bobby; Rough Gem; Tsuxiit; Where There's a Will There's a Whalebone; Jogging Gorgeous Summer; Volcanoes; If. official websites : www.islandsareforever.com