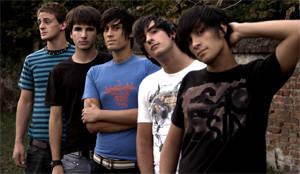 The concept of this band was born in 2003 from LUDO, when the "Special Ghest" dissolved. After different projects of its members, the plan of a SCREAMO band comes true only in the spring of 2005.Soon FTF start writing own pieces, satisfying the band and obtaining an optimal reply from the audience. Its genre is in continuous evolution, cross the classic emo-rock in order to arrive to the more aggressive influences of new screamo, with the alternation of two shouting. Thanks also to previous live experiences of its members, the band has the mastery of the stage, revealing a great show.In the spring of 2006 FTF self produce its first EP with the previous singer GIOTTA who leaves the band, replaced by STE. During 2007 a new single “Escaping from self-celebration” is spread in myspace and purevolume. In the the spring of 2008 FTF records a 3 pieces promo called “A Heatstroke, A Light”, at BroStudios (Turin) with Al & T from Goddass. FTF is now planning to produce an entire album cd in their own recording studio (TapeDrive Studio). www.myspace.com/flairtofailure