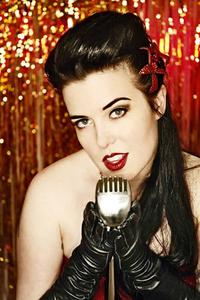 Colleen Duffy created Devil Doll one late, smoky evening, many blue moons ago with the mission of putting sex back into rock and roll. Deciding that the world of music had not heard the truth since Joan Jett and Johnny Cash, and hadn't blushed since Mae West, she grabbed her bass, a microphone and hit "record." Colleen was born in Cleveland and was raised on Elvis Presley and black and white movies. After conducting homemade Elvis performances for her neighbors, her life was changed forever the moment she heard Joan Jett's "I love Rock and Roll" on the radio. She picked up a guitar and started tellin' the story. Several ska and punk rock bands later, she started Devil Doll and a rockabilly/psychobilly radio show on 91.1 WRUW called "Rockability." The show raged from 1990-1995, and Colleen was credited as being the first female rockabilly/psychobilly dj in the United States. She was one of the founders of Hep Cat Records, in an attempt to make psychobilly and European rockabilly more accessible in the States. Her dedicated, listening audience spanned the country, recording her shows and mailing the taped versions everywhere there was good taste in music. She finally closed the show as a huge success and moved to New York, taking Devil Doll with her. Devil Doll and New York had a relentless love affair, frequenting clubs such as CBGB'S and Coney Island High regularly. The long subway rides, rainy afternoons in Union Square and a 4 am. closing time provided the beautiful seediness perfect for the Devil Doll story. These captured moments gave birth to some of Devil Doll's most famous lines such as King of Brooklyn's, "I want to kiss you then punch you in the face," and Liquor Store's, "...get your hand off my ass, you think I'm a bitch? Man, you ain't seen nothin' yet." Devil Doll has brought the story to the West Coast and now hails from Los Angeles. Touring and playing the U.S., as well as internationally, with such bands as Mike Ness, Social Distortion, Reverend Horton Heat, The Supersuckers, X, The Cramps, The Cadillac Tramps, The Detroit Cobras and Royal Crown Revue, she has played everywhere from The House of Blues to The Roxy to The Viper Room. Devil Doll has played The Hootenanny in CA, The Rockaround and Viva Las Vegas in Las Vegas, The famous Tease-O-Rama burlesque extravaganza, "It's Witchcraft" in Seattle with international burlesque star, Dita Von Teese as well as many other festivals and burlesque-centered events. She can be spotted on the cover of International Tattoo Art Magazine, the cover of Rockabilly Monthly, the cover of Prick, the cover of The Horse, as well as the cd cover of the compilation 'CoolGrrrls Kick Ass!' Colleen will be appearing on the hit tv series, "Miami Ink" in the Fall of 2007, and you will hear her voice on the theme song for the new upcoming car kulture show, "Built by Scratch." Devil Doll is the punk rock torch singer your father warned you about, weaving tales of sex and sorrow, pleasure and pain. A cold drink is thrown into your face at the same time you feel the velvet creeping up the back of your neck She will not apologize and she will not ask for forgiveness. But she will write her name in lipstick in the most unlikely places. The new, Devil Doll release, 'The Return of Eve,' on Lucky Bluebird Records, is available now at CDBaby.com and at live shows, and she is coming to a town near you. Devil Doll has put the sex back into rock and roll. www.devil-doll.com www.myspace.com/devildoll