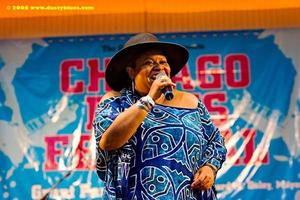 Deitra Farr is considered one of Chicago ’s top vocalists, according to Living Blues Magazine (May 1997). Fiery, energetic, and soul-stirring describes this woman, who has over the years been nominated for Traditional Female Blues artist of the year by the W.C. Handy Awards, Female Blues Artist of the year by the Living Blues Critics Awards, the British Blues Connection Awards, and the Les Trophees France Blues awards. This Chicago native began her career in 1975, singing with local soul bands, before starting her blues career in the early 1980’s. When Deitra was 18 years old, she recorded the lead vocals on Mill Street Depo’s record ” You Won’t Support Me “. That record was a Cashbox Top 100 R&B hit in 1976. Over thirty years later, that recording has been rereleased and is popular again worldwide. In 1983, Deitra began her blues career working at the major Chicago blues clubs, such as The Kingston Mines, The Wise Fool’s Pub and Blue Chicago. She also toured the US and Canada with the Sam Lay Blues Band. From 1993 to 1996, Deitra was the lead singer with Mississippi Heat, recording two CD’s with this all-star group. In 1997, Deitra resumed her own solo career, continuing to sing blues, while reaching back to her soul music roots. After recording on eight previous CD projects with others, she recorded her first solo CD, “The Search is Over”, for the London-based JSP records. In 2005, Deitra released her second JSP CD “Let it Go!” The multi-talented Deitra Farr is also a published writer, poet, songwriter, and painter. A graduate of Columbia College (Bachelor of Arts in Journalism), Deitra has recorded many of her own compositions and has written articles for the Chicago Daily Defender, The Chicago Blues Annual, and the Italian blues magazine il Blues. Currently she has a column “Artist to Artist” in Living Blues Magazine. In 1990, Deitra represented the Chicago Tourism Bureau in Düsseldorf, Germany and has toured England, Wales, Iceland, Finland, Norway, Canada, Holland, Belgium, France, Switzerland, Monaco, Italy, Yugoslavia, Greece, Israel, Austria, Latvia, Portugal, Sweden, Mexico, Guadeloupe, Lebanon ,Spain ,Denmark, United Arab Emirates ( Abu Dhabi and Dubai ) and Qatar. Deitra toured Europe with the 2000 Chicago Blues Festival with Lil Ed and the Blues Imperials. In 2003, Deitra completed a six week British tour with Otis Grand and Bobby Parker, as the American Festival of the Blues II. She did the 2004 Chicago Blues Festival European tour with Jody Williams and Andrew “Jr. Boy” Jones. From 2006-2008 Deitra toured with The Women of Chicago Blues project with Zora Young and Grana Louise. The Italian newspaper, The Pistoia La Nationale, proclaimed Deitra Farr “Regina del Blues”. Be a witness. www.deitrafarr.com www.myspace.com/deitrafarr