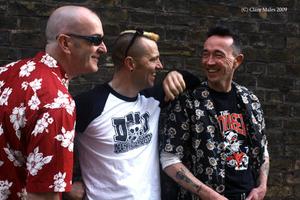 In 1998 Russ Surfer, Drummer for The Highliners, left to start a new band. This time as the frontman, based on his love of Surfing, 50s Hot Rods & cult films.The name would be Death Valley Surfers. Russ met Thomas Lorioux (Paris) at the psycho festival in Calella, Spain. Thomas had been playing in French Psycho & Rockabilly bands for many years. First rehersal was in Paris, cool start. Next came Sprex on drums & Ricky (The Blue Devils) on Saxophone, a swinging sax band was a must have for DVS. Then Kathy X on the lead Guitar. She had done some work on The Highliners Album "Spank-o-Matic", where they first met. A Demo CD was recorded, 100 copies pressed & sold at gigs. They all were snapped up quickly. The first big event for DVS was at Apremont, France. An amazing festival with over 500 french psychos having one big party. The DVS train was on the way to entertain anybody who wants to have fun. They have their own style of Punkabilly mixed in with Country, Surf, plenty of humour & a big fat swinging saxophone. We call it Crazy Rock’n’Roll. A DVS gig is about having a party with the audience, sometimes including a beer drinking contest. Tequila is given out while they play Tequila & the most silly dances are copied by the crazy folks down the front. The DVS revolving door has always turned, band members have come & gone. This has made it hard to get time in the recording studio. Two more 5 track CD were released both on Punkabilly records. Both are sold out & now very hard to get, but there might be some re-issues later in 2008. Their have been 25 members over the last 10 years. Check out the current crop of lunatics below & after them is an extensive list of our past servants. DVS have not played too many gigs in England but have toured all over Europe. Visiting France, Holland, Germany, Belgium, Spain, Czech Republic, Poland, Austria, Italy, Switzerland & even Argentina. Where we played at the Famous BA Stomp. The biggest show that DVS have ever done with 1200 people inside & the doors total sold out. The latest Album release is out on Punkabilly Records. LAST DANCE SALOON. 11 spanking tracks that will get any party swinging. One final thing If you cant laugh at a DVS gig then you should go to see a Doctor. DVS could be the worst or the greatest Rock n Roll band in the world. Only you can decide that. www.deathvalleysurfers.co.uk