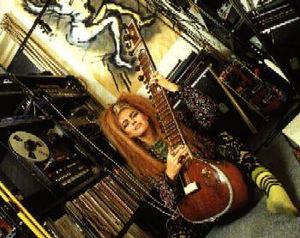 Danielle Dax was born in Southend England. At an early age she showed a lot of talent and interest in visual art. In her teen years she was active in painting and acting. Her involvement with music started as a member of a group called the Lemon Kittens founded by Karl Blake. The first Lemon Kittens album was called "We Buy a Hammer for Daddy " released in 1980. Danielle and the Lemon Kittens produced their second and final album together in 1982 called "The Big Dentist". Danielle departed the Lemon Kittens and struck out on her own and in 1983 produced "Pop Eyes". "Pop Eyes" was a total solo effort by Danielle released in 1983 on Awesome Records . She did everything from writing the songs, playing the instruments, producing , mixing , art work, engineering, everything necessary to produce the final product. "Pop Eyes" was a major step forward, technically, musically, and artistically from the Lemon Kitten material and established Danielle as a powerful creative force in the music industry. It was apparent that this artist was innovative, talented, and had the necessary tools to produce high quality art with little outside help. The original art work for "Pop Eyes" also created by Danielle proved to be too shocking to some in the music industry and was replaced with artwork from Holly Warburton. Holly's haunting creations can be found on most of Danielle's early work. In 1984 "Jesus Egg That Wept" was released, and demonstrated more musical and technical growth. Evil Honky Stomp , the first cut from that album is a great example of how Danielle can take familiar styles of music and warp it into something totally different, but still faintly recognizable. This creative technique continues as a Danielle Dax trademark and is another force in her vast arsenal that establishes this artist in a class by herself. "Inky Bloaters" released in 1987 was yet another showcase of classic works that continued to spew from the genius of Ms. Dax. In 1988 Danielle Signed with Sire in the US and released "Dark Adapted Eye" , a compilation of earlier work. This album actually contains all the songs from "Inky Bloaters" except Born to be Bad, and includes 9 additional songs. In 1990 "Blast The Human Flower" was released on Sire Records. This work is a little more poppy than previous efforts, and launched Danielle's first commercial success Tomorrow Never Knows, a rework of the famous Beatles creation. Tomorrow Never Knows another Daxized musical manipulation is the only song ever released by Danielle (to the best of our Knowledge) that was not written by her. www.danielledax.com www.myspace.com/ddax