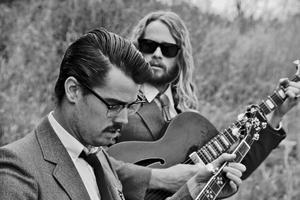 Broken Down Suitcase formed in the winter/spring of 2009 in the small mountain town of Golden, British Columbia. Eric Larocque, born and raised in southern Ontario, always had a passion for folk and roots music; while his move to Golden was not for music career, it soon became so. His love of folk music led him to learn old-time guitar techniques, banjo, harmonica, and a swath of other styles unique to the americana sound. However, he felt there was something missing. Benjamin Caldwell's move to Golden was also not for musical reasons, having eventually meeting Eric Larocque at the town's local Open Mic night, the two hit it off and started writing and performing together. Benjamin's years growing up in church choirs taught him the harmonic styles indicative of old-time music. This was the missing factor that Eric was looking for. During the course of the next four years, Broken Down Suitcase travelled across British Columbia and Alberta, playing numerous venues in the region. They played on Via Rail's On-board Musician program, taking them from Edmonton to Toronto. As well, during their short career, they toured Europe on three separate occasions, playing England, Scotland, Norway, Germany, the Czech Republic, Switzerland, France, and Belgium. Broken Down Suitcase has always been about dancing the subtle line between progression and conservation. Their use old styles of playing and singing aides them in their journey to bring that sound to a modern era. They thrive in new experiences and that is why their next task is their most ambitious to date; teaming up with Vancouver based singer-songwriter Jean-Paul Maurice and Videographer Jonathan Krauth of Green Couch Sessions to make a documentary of Canadian musicians trying to make their way in Europe. www.brokendownsuitcase.ca www.facebook.com/brokendownsuitcase