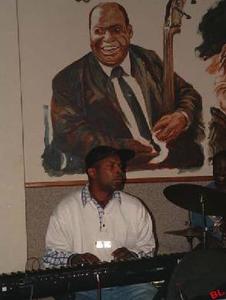 Bobby Dixon plays and sings the blues. Bobby Dixon son of legendary Willie Dixon is a songwriter, producer and artist that has earned his respect all over the world. Performed in concert with numerous recorded artists including: Buddy Guy, Bo Diddley, B.B. King , Junior Wells, Rolling Stones, Kinsey Report and many more. Dixon makes a great point here. In the past, life was hard for the mostly black blues singers, and they brought that hardness into their music. Beautiful music it did make, but it often had a sad or downtrodden theme to it. Now the blues don't have to be so blue, and we can see that in the music of today's writers and performers. Blues , now done by a variety of musicians, can be funky, upbeat, or whatever it wants to be". That's not to say that Bobby Dixon doesn' t go after some of the classics. You might see him perform his papa's old songs such "Little Red Rooster", " Hoochie Coochie Man", or "I Can't Quit You Baby", but with his own flair. Bobby does not fail to pay tribute to his father 's legacy, a legacy that is the root for much of the music we hear today.