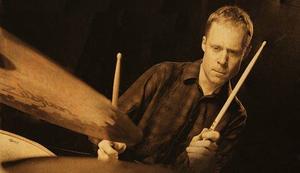 As a drummer, Bill Stewart's playing is distinguished by its melodic focus, and its polyrhythmic, or layered, character. To say his playing is "melodic" means there is a sense in which one can "hum along" to his solos, as there is a clear sense of melodic construction. His improvisations favor the development and layering of motivic ideas over the raw generation of excitement or display of technical prowess. Stewart has great touch, or dynamic precision, so that his ideas are articulated with a pleasing exactness and clarity. He has also achieved a very high degree of independence of his limbs, so that not only the ride and the snare/toms, but also the bass drum and hi-hat, are free to participate as melodic "first-class citizens." His drumming bears the influence of various melodic drummers who preceded him, including Max Roach, Art Blakey, Roy Haynes, Tony Williams, Jack DeJohnette and Al Foster. As a composer, Bill Stewart is forward-looking, and seems not to want to repeat what others have already accomplished. In other words, his tunes have a bit of an avant-garde flavor. The melodies, harmonies, phrase lengths, and measure lengths are often altered so as not to conform too closely to traditional jazz language. Some of his tunes (such as "Mayberry") also feature a built-in "free blowing" section, surrounded by a composed "head" (in the case of "Mayberry", a parody of the theme song of the Andy Griffith Show.) The concept of "Mayberry" may have been borrowed from Stewart's long-time collaborator John Scofield, who has written many tunes of the same general shape. http://en.wikipedia.org/wiki/Bill_Stewart_(musician)