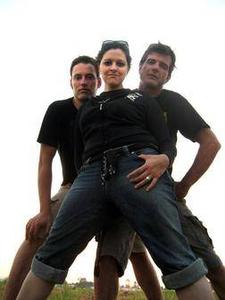 Don't let the upright bass, greased hair, and sideburns fool you. THIS AIN'T NO ROCKABILLY BAND! It's way too dirty and you wont wanna swing dance to it. But dance you will. With elements of dirty rock'n'roll, cowpunk, polka and dark humor you wont know weather to laugh or die. The band is so willing to entertain you, they sacrifice their own well being with ridiculous stage stunts which has ended often with a trips to the hospital and almost the morgue. Thats how much they care. It's a show you will want to crucify yourself if you miss. Featuring Heini Heimpel on Vocals and gut-wrenching guitar, Luscious Lloyd Clark on upright bass and Stephan Fleck pounding the drums in perfect harmony. Here comes their 4th full length album, bigger, better, and darker than ever. Rightly named "The Black Album" featuring 13 killer tracks including "Show me What You Pray", "666/13", "Waiting for the Kick" & "When I Die"...The Black Album comes with dark tales and true stories from life on the road and shows their many flavors...all of them drenched in sweat and beer, rolling around in the graveyard with ponies and dandelions. "The Black Album" was just released in April 2014 following up their first US-Tour and Vinyl Release, performance at SXSW in Austin, Texas, and an extended Record Release Tour accompanied by European-wide album promotion from April - June, along with selected festival appearances. Get 'em while they're hot! http://soundcloud.com/ponyolga http://www.facebook.com/ponyolga